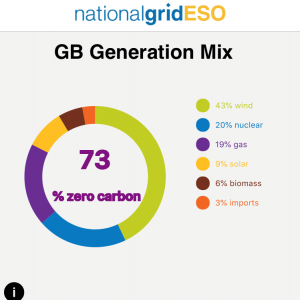 National Grid ESO has just released its own app (available in Google Play Store and Apple App Store) – it looks pretty and has some nice features for low-carbonistas in Great Britain. I especially like the records page, which has been triggered recently for both “Max No Coal” Hours and “Max Solar” MW. The key content though is grid carbon intensity, which has been available for some time via third party apps.

A while back National Grid ESO got together with Environmental Defense Fund Europe, University of Oxford Department of Computer Science and WWF to develop a carbon intensity forecast for the GB Grid. The collaboration (“carbonintensity.org”) uses machine learning and a model of the GB power system to forecast carbon intensity, with the excellent aim of giving users – via an Open API – the ability to time their power consumption to minimise climate impact. This feeds both NGESO’s new app – and the third party ones. 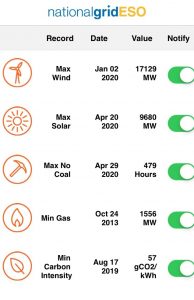 The collaboration estimates and forecasts the average carbon content of grid electricity. For true energy geeks, the “marginal” carbon grid content would be a more relevant tool to optimise demand loads: basing the decision not on all the power plants that are already running (because most of them will run anyway) but what additional plant might need to run slightly more or slightly less to satisfy the controllable demand. However, assessing the marginal plant is a subjective matter, and it’s also true that marginal carbon content will tend to be low when average content is low. But perhaps most importantly it’s far easier for people to relate to average carbon content – and the evidence from the early apps is that it’s been really popular, which is fantastic.

A far more debatable element of the collaboration – which features heavily in the new app – is dividing GB into regional chunks, each with its own carbon intensity. In lots of ways this isn’t helpful. 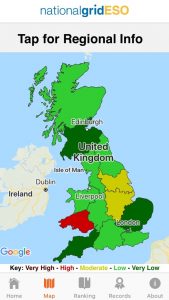 Firstly, whilst regional averages are often very different, the marginal plant – which is the thing that really matters – is nearly always the same for the whole country. So turning on some extra washing machines in South Wales has the same impact as turning on some in Kent. Both might actually result in a power station being turned up slightly in Yorkshire. There are relatively few constraints in the national system, and most of them aren’t active most of the time. (Though Orkney with limited connection to the mainland and surplus renewable power is an honourable and frequently constrained exception, and possibly permanently deserves its own carbon intensity).

Secondly, as a matter of principle, consumers all over the country have paid communally for the transmission system – including some huge new investments aimed at avoiding constraints – and for renewable subsidies like the Renewable Obligation, CFDs and FITs. Indeed they also pay equally for the National Grid ESO to balance the national system and alleviate any constraints that remain. So it seems a bit wrong to tarnish consumption and consumers in the areas that host fossil fuel plants which are used by the country as a whole.

Unfortunately I have seen many comments on social media like “A bad day to live in South Wales” when those plants are running for the benefit of everyone – so it does seem that the consuming public are understandably confused by the locational signal that appears to be given. Maybe National Grid ESO should only turn on the regional carbon intensity readings for a particular area when there is an active constraint – which would mean that the public could respond and actually help alleviate the constraint? That would make a nice app into a fantastic one. 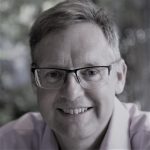 Tom Bent is a wholesale energy market expert. He spent 19 years as a trader and commercial manager with SSE plc, ultimately as Director of Operations and Trading. Tom now operates as an independent consultant, offering stakeholders in energy markets a combination of strategic insight and broad operational experience. Recent clients have included major utilities, a software provider, generation equipment manufacturers, renewable developers and new entrant suppliers – Tom has assisted them form strategy, commercialise ideas, and manage risk. Tom holds a first class degree from Cambridge University, and was previously a prize-winning Management Accountant. Tom has been a TUME Associate since November 2017.

When introducing new technology based solutions, it is important to understand the market context you are delivering it into. National Grid ESO obviously has in-house expertise available, however in this first version of their app there is a true risk it drives the wrong behaviour / understanding. Low carbon records being broken are fantastic to see, however improved guidance on marginal carbon intensity could drive real change in consumer behaviour. Accurate carbon intensity and pricing signals will be huge within the energy transition wherever there are decisions to use, store or generate energy.

If are a clean tech start-up bringing new innovation into the energy market, it is often difficult to understand & quantify the benefits your solution may provide. A few hours of remote support from an expert (such as Tom) via TUME Interim, ensures you can have increased confidence in realising the true value your solution is able to deliver. Please contact us below or ink in with Tom here if you would like to start the conversation…