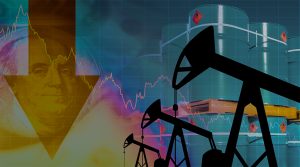 Front-month WTI turned negative for the first time in history

Yesterday, for the first time in history, the crude oil benchmark, West Texas Intermediate (“WTI”) turned negative. The reasons for this are quite technical – the US oil market is a pipeline market with the WTI contracts being valued for delivery at Cushing in Oklahoma, an area where the storage facilities are somewhat limited and largely full.

As heavy industry has been shuttered as a result of Covid-19, use of oil across the value chain has fallen dramatically in a very short period of time. This has meant that in places where there is little available storage capacity or user demand, the prospect of receiving new quantities of oil becomes hugely problematic, and this is exactly what happens with futures contracts when they come to delivery. Each WTI contract, traded on the CME Group’s New York Mercantile Exchange, is physically delivered in the amount of 1,000 barrels.

The WTI benchmark that has turned negative is the front month contract which expires today, so holders of the contracts have been desperate to offload them to avoid taking delivery of oil which will be difficult to use and very expensive to store, leading them to pay people to take this oil off their hands. 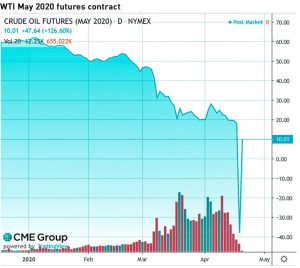 “With adequate storage in Cushing unavailable to those who need it, selling intensified. This issue is most intense for May WTI because oil demand is at its weakest, with full coronavirus containment measures in place across much of the US. Storage at the Oklahoma facility is expected to be full within weeks,” Ann-Louise Hittle, Wood Mackenzie

On 10 April the storage facilities at Cushing held 55 million barrels of crude, which is around 72% of the working storage capacity of 76.1 million barrels, according to the Energy Information Administration. However this reflects the physical oil in store and not the amount of capacity that was leased out, meaning the remaining capacity is not necessarily available to owners of the front-month WTI contract as capacity holders held out for the highest prices.

WTI contracts for delivery over the next few months have also seen their prices fall, but are still firmly positive, since the near-term over-supply issues have yet to hit them – and may not, as production is adjusted and stocks are slowly consumed. In addition, the US government is considering making use of its Strategic Petroleum Reserve (“SPR”) as temporary storage – President Trump has spoken about putting as much as 75 million barrels into the SPR, filling its capacity, and deploying financial incentives to encourage producers to cut output.

Brent crude, the measure of oil pricing based on the Brent Blend, Forties Blend, Oseberg and Ekofisk crudes produced in the North Sea, is not subject to the same storage pressures since Brent is a sea-borne market – the oil is shipped by tanker (typically Very Large Crude Carriers or VLCCs, which can hold around 2 million barrels equivalent) and transported to oil-consuming markets around the world. Although the storage capacity of these tankers is also largely full, there is still spare capacity in large oil importing nations such as South Korea, Japan, India and China, meaning the pressure on the Brent contracts is significantly lower. 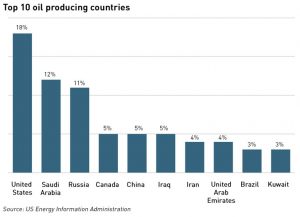 What does this mean for oil prices over the coming months?

Two weeks ago, OPEC and others including the US, Canada, Russia and Brazil agreed to cut oil production in order to prevent a collapse in prices due to global over-supply, after a brief “oil war” which saw Saudi Arabia, the world’s swing producer increase output as demand fell due to the Covid-19 crisis.

This is a tactic periodically followed by the Saudis as it tries to price out the competition. Saudi Arabia is the world’s lowest-cost producer with a production break-even of US$20 /bbl versus US$40 /bbl in Russia. Both countries rely heavily on oil to support their economies, with oil funding 87% of Saudi Arabia’s national budget, and 68% of Russia’s. For these countries to balance their books they need to see oil prices of around US$80 /bbl and US$60 /bbl respectively.

The “OPEC+” agreement to cut production will reduce global supply by 9.7 million barrels per day, which amounts to around a third of the global daily oversupply. The question is whether this will be enough to support prices as most countries in outside Asia remain in lock down.

“It hasn’t taken long for the market to recognise that the Opec+ deal will not, in its present form, be enough to balance oil markets,”   Stephen Innes, chief global market strategist, Axicorp

The collapse of the WTI front month contract has garnered headlines round the world, and is something of an embarrassment for the Opec+ countries who expected their production cuts to halt the drop in prices, but to a certain extent this is unfair: the term “demand destruction “ is often used to signify falling demand, but never before has it described literal elimination of demand on such a scale.

Analysts expect production will need to be cut further to bring the markets back into balance, however in the near term even that may not be enough. The International Energy Agency (“IEA”) expects US producers will be forced to reduce production significantly and predicts output will be 2 million barrels per day lower by the end of the year than in December 2019.

“There is no feasible agreement that could cut supply by enough to offset such near-term demand losses,” International Energy Agency

The IEA has suggested that a gradual recovery may begin to gain some traction in June as recovering demand makes some inroads into storage balances. But at this point any sort of price recovery looks unlikely for some time.

In the short term, traders holding WTI contracts whose value collapsed from +US$20 /bbl to -US$40 /bbl will have taken major losses, although those that managed to hang on towards the contract’s expiry would have benefitted from its recovery to around US$10 /bbl. But, as pointed out in the FT, one day’s losses will not decimate the US energy sector.

However, the bigger issue is the extent to which supply continues to exceed demand during the lockdown. The US is now producing 2 million barrels of oil per day more than its refineries require, so unless new storage capacity is found, some of that excess production will need to be shut in. The markets are showing some concerns on this point – the June contract, which rolls into the front month tomorrow, has lost almost half its value since Friday, and even Brent dipped below US$18.00 /bbl during today’s trading, before recovering to close at US$19.86/bbl.

“The biggest impact will be bankruptcies. Despite many oil companies cutting capital expenditure by up to 50%, many, many companies are going to go bankrupt. Around 80 oil and gas companies filed for bankruptcy in the 2015 sell off. The current situation is far worse than 2015, so the industry is going to look very different after this wash out”  Stephen Innes, chief global market strategist, Axicorp

The break even price for US oil production is in the range of US$48 – US$54 / bbl, so any sustained period of lower prices will inevitably put some producers out of business. Painful as that might be, the US has a diverse economy (oil accounted for just 8% of GDP in 2018) and will weather the storm.

The real difficulties will be felt in countries which rely on oil revenues to support not only their economies but their entire political structures, as is the case in Russia and Saudi Arabia. The economic and political implications of Covid-19 are only just emerging – the extent of the harm will depend on how quickly lock-downs are lifted and demand can begin to recover. 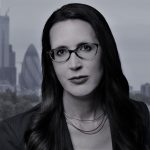 Kathryn Porter is an independent consultant who has worked in the financial and energy markets since 1997.  She has experience in physical and financial electricity, gas and oil markets. Kathryn advises clients on all aspects of wholesale gas and electricity markets, as well as supporting them in energy market entry, new business and asset evaluation, energy risk management and financing. Kathryn has previously worked for Centrica, EDF Trading, Société Générale, Barclays Capital, Commerzbank and Deloitte. Kathryn holds a Master’s Degree in Physics from the University of Exeter and an MBA from London Business School, is a Chartered Fellow of the Chartered Institute for Securities & Investment and the Chartered Management Institute and also a member of the Parliamentary Group for Energy Studies Kathryn has been a TUME Associate since September 2017.

The Utility Market Experts offer expert support to help understand the complex and fast changing energy market we operate in.

As our market continues to evolve, it is important our businesses evolve with them to ensure competitive advantage. If you operate in the electricity or gas market; oil moving into un-chartered waters is likely to lead to risks and opportunities for your company & clients. Irrespective of asset type; investors and developers need robust future proof returns and volatile markets are a constant threat to this. As market conditions evolve you need to review financing & market access arrangements and to continually review risk management strategies remain fit for purpose.

If you are involved in the energy market and believe your existing commercial arrangements may benefit from a review, then you may wish to consider utilising short term support via TUME Interim from an independent expert (such as Kathryn) to review your existing set up and identify potential opportunities. Please contact us below or link in with Kathryn here if you would like to start the conversation…